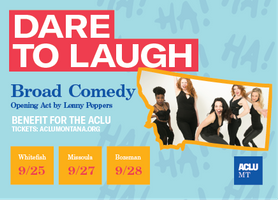 Dare to Laugh with Broad Comedy, an all-female comedy troupe touring the state to benefit the ACLU of Montana. Broad Comedy has been producing snarky, provocative and loveable all-women’s comedy and musical-satire since 2001. With the Broads, nothing is sacred, except an unflinching look at America today. It’s outrageous, it’s community, it’s a party on a stage. Opening for Broad Comedy is local stand-up comedian, activist, artist, writer and filmmaker Lenny Peppers. An enrolled member of the Northern Cheyenne tribe, and a Crow tribe descendant, her passion is to have Indigenous stories heard clearly above the din of the modern world.