A new survey suggests Montanans who enrolled in the state’s Medicaid expansion program are healthier, less likely to put off treatment and more able to access mental health and substance abuse care.

Forty-three percent of those who responded to the nonprofit Montana Healthcare Foundation’s survey said their general health has improved since joining the program. Nearly 70 percent reported improved access to medical care.

The survey results come as Montana’s Legislature debates extending Medicaid expansion. The 2015 law authorizing it expires at the end of June unless lawmakers continue it.

"When you see nearly 70 percent of people saying that their ability to now access needed services has improved, that’s evidence that the program is working as intended. Its giving people access to care and it’s improving health."

The foundation worked with the state to survey a representative sample of the roughly 95,000 Montanans enrolled in the program.

Wernham says one of the survey’s largest insights is that nearly half of respondents reported improved access to needed mental health and substance use treatment services.

What’s blocking their ability to get help?

"The answer to that question is clearly that one of the barriers was the ability to pay," Wernham says.

Sixty-four percent of survey respondents said that prior to receiving Medicaid coverage they waited to seek medical care. Nearly half took less medication than prescribed, due to the cost. 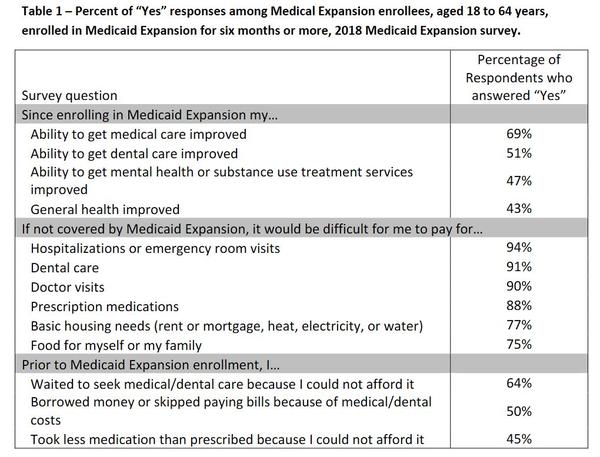 Montana will have to come up with 10 percent of that next year, an estimated $59 million. The federal government will pay the other 90 percent.

"Those dollars are in the budget for every state to be able to expand Medicaid. It’s not as if we would all see lower taxes when we go to pay our taxes next year if Medicaid expansion were ended," Wernham says.

Republican legislative leaders have said they want to reduce the number of people on expanded Medicaid. Wernham says the foundation may look at the party’s proposal for continuing Medicaid expansion once a final draft of the bill is released.