In the world of tea, a new variety is on the cusp of becoming the next big craze. It’s praised for its health benefits — high levels of cancer-fighting antioxidants exceeding even those found from drinking green tea — and its resistance to climate change in Kenya where it was developed. It came onto the market about five years ago, and at the moment, Lake Missoula Tea Company in Missoula, Montana, is one of the only distributors in North America. It's called purple tea, and it might just save Kenya's struggling tea industry.

On a cold afternoon in February, I take refuge in the Lake Missoula Tea Company. The shop is bustling with customers. Some peruse the shelves of bulk, loose-leaf tea, while others chat at the tea bar and sip their brewed beverages. But I’m here for one thing only: a tea that’s turning Kenya’s tea farms purple. I place my order, and within a few minutes, Jake Kreilick, co-owner of Lake Missoula Tea Company presents me with a porcelain cup filled with a pale yellow tea. It has a lavender tinge and a smooth, delicate flavor.

"It’s a new color variety," says Jake Kreilick. "Starting about 25 years ago the Kenyans started working on it … about five years ago that it came into the United States. It has many health benefits. And then the other part about the purple tea that’s unusual is its environmental qualities. It’s drought-, frost-, pest-resistant. They’ve created a more resilient plant which hopefully will be able to withstand a lot of the climatic disturbances."

Behind China and India, Kenya is the third largest tea producer in the world. The tea industry employs about four million Kenyans, and when yields are low or the global price for tea drops, Kenya’s farmers — and the economy — feel the aftershock. Until recently, almost all of Kenya’s tea was low-grade, bulk tea that was exported for black tea blends, such as English Breakfast and Earl Grey.

When prices plummeted in 2014, many conventional tea farmers sought a tea variety that would yield higher profit margins. They also wanted something that would prove more adaptable to climate change. Tea grows best in conditions with steady rainfall and temperatures between 60 and 84 degrees Fahrenheit, but a higher frequency of frost, erratic rainfall and drought have plagued tea farmers throughout Kenya. Now, many farmers are turning to purple tea as a solution.

Kenya’s Tea Research Institute released its purple tea for commercial use in 2011. The hybrid proved to produce higher yields and resist drought, frost and pests, and a study by Maypro shows its health benefits exceed even those found from drinking green tea. 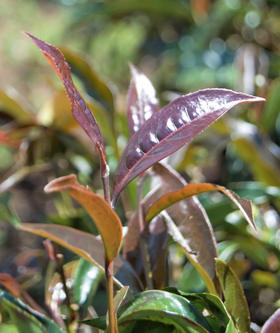 The plant’s large, purple-colored leaves contain high levels of anthocyanins, a type of antioxidant that gives other purple foods – like blueberries and cranberries – their color. Anthocyanins have been shown to reduce the risk of cancer and neurodegenerative diseases, such as Alzheimer’s and Parkinson’s. Marketed as a high-value medicinal tea, purple tea brings in three-to-four times more revenue than conventional black tea.

Sound too good to be true? Well, there’s a catch. Purple tea needs a processing method different from the process used for black tea, and currently, few factories are equipped for it. Furthermore, until recently, small-scale farmers who produce about 60% of Kenya’s tea were not allowed to directly export their product.

But many Kenyan tea farmers are still hopeful that they can cash-in on purple tea. More factories are beginning to process purple tea, and the government recently eliminated some of the export barriers for small growers. This has allowed David Bor, a Kenyan tea farmer, to sell directly to Lake Missoula Tea Company.

Jake and Heather say they knew “just about nothing” about tea before getting into the business. Their friend provided mentorship, and soon after, Lake Missoula Tea Company was expanding the number of teas it had to offer while Jake and Heather learned more about the varieties, health benefits and sources.

Now they hope other people will become tea converts through educational outreach and exposure to high-quality artisan tea. 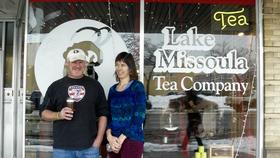 "Artisan means that it's been handpicked," says Heather. "It's intentional picking; they know they have an order — they're picking for black tea or they're going to make white tea or green tea, and that they're using methods that are tried and true. There's a tea-master there who's very hands-on instead of a massive factory. It guarantees that you're going to get a particular quality when it's handpicked."

They say they try to buy tea from sources that provide fair wages, benefit the local community and mitigate environmental impacts. In 2014, Jake and Heather traveled to Indonesia to learn more about the tea they were sourcing and the people who produced it. The following year, they visited farms in China and Taiwan, and this past fall, they traveled to meet David Bor, a Kenyan farmer who grows artisan purple tea in a region dominated by low-grade black tea plantations.

Lake Missoula Tea Company previously carried purple tea from Royal Tea of Kenya, but when their friend and contact for the tea passed away, they were left without a source. Last year, David reached out to the Kreilicks to ask if they would want to buy from him. A few months later, Jake and Heather found themselves walking through David’s picturesque tea farm in the Nandi Hills region, one of the three primary tea-growing areas in Kenya.

David has a 100-acre farm, which is larger than the average Kenyan tea farmer, but it’s still small compared to the tea estates owned by corporations like Lipton and Unilever. Heather says David wants to remain a small-scale operation to ensure the quality of his tea and sell it at a higher price.

"So David's actually unusual like Jake was saying. He has 100 acres," says Heather. "He's really figured something out. He's trying to do something a little different and really help his community." 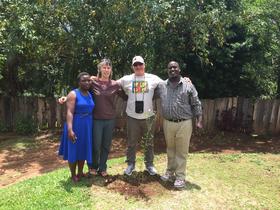 Since David and other small- to mid-scale tea farmers can charge higher prices for purple tea, they don’t need as much land, labor and resources to compete with large tea plantations. They can focus on quality over quantity, and pay higher wages for skilled labor.

David employs 45 tea pickers from his community, and unlike some of the large tea estates, he pays his workers within the week. He also gives his employees purple tea plants of their own to grow, sells seedlings to other farmers and provides training to grow and harvest tea. Currently, he sends the harvested purple tea to a nearby, small-scale processing facility, but Jake says David wants to open his own tea factory in the future to maintain a high quality product.

Heather and Jake say they value the relationships they have developed with the people who grow and sell their tea, and they say their customers care as well.

"I feel like more people want to know where the tea is grown, and how it’s processed and what benefits the tea provides to them, health-wise," says Jake. "The purpose for our trip was to verify what kind of operation David has so we now feel comfortable knowing that it is organically grown and processed. It is benefiting local growers and pickers; it is appropriate in terms of the scale. So for more environmentally and socially-conscious shoppers, it does matter. But it still has to taste good."