You Might (Not) Want To Sit Down For This: Squat Toilets Solve Potty Problem In Yellowstone

When visiting Yellowstone National Park or any parks in our region, there's a lot to consider. Will traffic be bad? What about the weather? Will I see elk, buffalo, maybe even a grizzly bear? And then there's something more basic. Will I be able to find a toilet that's clean, has toilet paper, and if I'm lucky, somewhere to wash my hands? You could be in for a surprise, since the park recently added squat toilets. 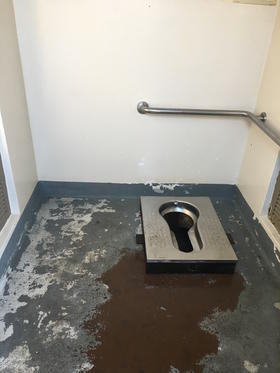 You can find of them at West Thumb Geyser Basin in Yellowstone. It's essentially a short, metal rectangle in the floor with a hole in the middle - about 12-inches in diameter.

"Not really anybody used to that kind of thing," said Frank Ng. He was visiting the park from Massachusetts. But Ng was originally from China.

"I don't mind a squat toilet but I think it needs much, much better ventilation," said Ng.

Squat toilets are the norm across Asia. And that used to be the case in Europe and here as well. Vincent Ho is a gastroenterologist. He said it wasn't until about the early 19th century that seated toilets started showing up in London.

"I think what we see now is across the developed world, seated toilets have become universal, you could say," said Ho.

But he also said seated toilets are not so good for your health. Squatting is more natural and generally better for you. The problem is Ho said, those health benefits aren't always enough to convince people.

"Part of the drawback with the conventional squatting toilets is the fact that there's a bit of a stigma around it," said Ho. "I think that although it's popular in many other countries, in the western world it doesn't appear to be popular. It's not a desirable posture to be in."

But squat toilets could be making a comeback in the western world, at least online. A Youtube ad involving a unicorn, an English knight and psychedelic soft serve ice-cream is making the rounds. It's a bathroom stool that converts a sitting toilet into a squatting one. As of now, the video has over 34 million hits.

And this brings us back to Yellowstone National Park. The park's decision to go full-on squat toilets wasn't in response to online marketing ads like this one, or even health. They had a toilet problem.

"That prompted us to act," said Yellowstone's Morgan Worthin.

Visitors were complaining about the condition of the restrooms. 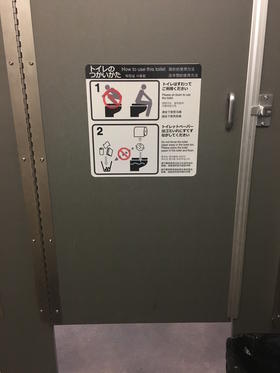 "The broken toilets were caused by people that were using toilets differently than what we as U.S. citizens were accustomed to," said Worthin.

She differently meant as in squatting on top of toilets, instead of sitting on them. The result - broken seats and some really gross conditions.

"The squat toilets, they have made a difference," said Worthin.

It costs around $1,000 to convert a western toilet to a squat one. But Worthin said that's a pretty good deal, considering Yellowstone hasn't seen many broken toilet seats since they added a squat option.

Down the road in Jackson, Teton County Parks Manager Andy Erskine said they're considering this route as well. He said misunderstandings about toilets made their way to his town this summer.

"We've just seen such a tremendous increase in the tour bus business to Jackson, which has a lot of Asian visitors coming with it," said Erskine.

But Teton County isn't going straight to the squat toilet option. Instead, it's starting with directions on how to use a Western toilet.

"The stickers that we have put up now are in Japanese, Taiwanese and Mandarin—which we think covers all the bases—as well as in English, with some pictures and diagrams on how to properly do things," said Erskine.

And they seem to be working.

"Once we got those up, literally within days we started to see a real kind of rectification of the problem," said Erskine.

Teton County hasn't ruled out installing squat toilets in the future, but Erskine said if this current solution isn't broke, why fix it?