A Day In The Life Of An Owl Researcher

Denver Holt has been counting long-eared owls for 30 years. Known around the world as "Mr. Owl," Holt is always searching for answers about the iconic birds, and often searching for the birds themselves. MTPR's Chérie Newman tags along to learn how to catch an owl, and to find out why these birds are so important.

After graduating from the University of Montana with a degree in wildlife biology — and no desire to sit behind a desk — Denver Holt started a nonprofit organization: the Owl Research Institute, in the Mission Valley. And then went on to become an international wildlife research superstar, a man known around the world as “Mr. Owl.” He’s always searching for answers about the iconic birds. And often, searching for the birds themselves.

Chérie Newman: Joke. Today, Denver and researcher Matt Larson walk about 25 yards through a snow-covered field off Mullan Road, between Missoula and Frenchtown. The sky is thick with low gray clouds as they approach a willow thicket.

DH: This is an area where they roost, all throughout here, and hopefully they’re here now. We’ll just head in and see what we can do. (whispers) Here, Chérie, do you see the one’s sitting way down there? Look through that tunnel and you can see it. We’re whispering, but it’s not like they don’t know we’re here, you know, it’s so funny. We’re all oh gosh let’s be quiet. But the owls, they know. I mean, that’s what they do. (laughs) So we’re gonna get set up here. We’ve got a little bit of banging to do and get our nets set up.

CN: Denver and Matt dig through their packs to find equipment, then we walk through a narrow corridor in the bushes. Matt explains what they’re doing.

Matt Larson: We’re just setting up a mist net here. This is a really pretty nocturnal species and we’re using that to our advantage here because they don’t really like to be out in the open during the day. They get harassed by ravens and hawks and magpies and everything else, really, so they wanna stick kind of in the vegetation. And so we have these areas where you can imagine an owl would fly through in the vegetation here and we pick out a clear area like this to set up this mist net.

CN: The plan is for Denver and Matt to walk around either side of the thicket and flush whatever owls are in there toward the net while I move back and wait for some action.

DH:Alright we’re gonna go in and you might see a bird fly around you to the left or right, so just be heads up. If it’s brown and about three feet wing span and flies low it’s probably a long-eared owl.

CN : I wait, listening. It’s quiet for about a minute and then I hear an owl hit the net. At almost the same time, owls land in the bushes near me, and Denver yells.

DH: What did you see?

CN :I saw two owls. They came and landed right next to me and then they flew off to the south.

DH: Cool! We got one in the net if you wanna come over.

CN: Okay! When I arrive at the net, Matt is untangling an owl.

DH:Sometimes they get pretty tangled up, but you just take your time. It teaches you patience.

CN: Once the owl is free of the net, Denver holds it by the legs. It stands in his hands, looking calm. But every once in a while it flaps its wings or dips its beak toward Denver’s bare hand. The owl is gorgeous. Its eyes are yellow, and enormous. The owl’s feathers range in color from gray to dark brown to cream. Matt inspects the feathers closely, to determine the owl’s age.

ML:The darker feathers are actually the newer feathers and so when you look side-by-side you can see old feathers and new feathers. And so this bird, having two generations of feathers, is at least two years old.

CN : They also decide, based on the feathers, that this owl is a female. And then, Denver and Matt weigh the owl, by stuffing her into a sock. Is that somebody’s old hunting sock?

DH:Yes it is. We know exactly how much it weighs. We cut one end off and put the owls in them. For bigger owls we have old wool sweaters, you know, the arms of a sweater.

CN: After the owl is out of the sock, Matt pulls out a feather to get a DNA sample. She didn’t like that.

DH: No, she didn’t. It probably just pinches a little bit when we pull them out. Then he attaches a metal band to one of her legs, which may, or may not, add much to their knowledge database.

DH: Every once in a while we’ll capture a bird that maybe we banded as a nestling, or in its first winter. And then four or five years later you catch a bird and you say look at that number. That’s an old number. You say, God we banded this bird four years ago, five years ago. And it’s back in the same site. Where was it in between? And that we don’t know.

CN: What they do know, however, it that voles are a primary food source for owls.

DH: They’re the farmer’s friend. When we talk to the farmers and ranchers and tell them what they’re eating, they’re glad to have them. They don’t have to pay them. They go out at night. They kill small mammals that might be eating crops.

CN: Finally, Denver releases our owl. We watch it fly through an opening in the willow thicket and off across a field. But why do long-eared owls matter enough to study them for 30 years?

CN : Denver Holt and Matt Larson pack up their equipment and through the snow, back to their truck, armed with another set of owl data that will help organizations like the U.S. Forest Service, Bureau of Land Management, U.S. Fish and Wildlife Service, Montana Fish, Wildlife & Parks, and the Confederated Salish and Kootenai Tribes, make better land management decisions. 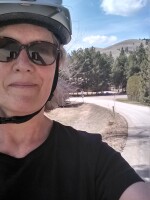 Chérie Newman
Chérie Newman is an arts and humanities producer and on-air host for Montana Public Radio, and a freelance writer. Her weekly literary program, The Write Question, is broadcast on several public radio stations, and available online at PRX.org and MTPR.org.
See stories by Chérie Newman
Latest Stories