Montana Wilderness advocates are launching a campaign in opposition to a bill introduced by the state’s Republican Senator Steve Daines. If passed, that bill would eliminate protections for some federal lands in Montana.

A new coalition called “Our Land, Our Legacy” says it plans to fight against Daines’ bill with social media messages and an advertising campaign. It hopes to keep more than half-million acres in Montana designated as "Wilderness Study Areas," also known as WSAs. That means the land is currently protected -- its closed to mining, logging and certain bicycle and motorized vehicle use.

John Todd, director of the Montana Wilderness Association, is a coalition member.

"This would represent the biggest rollback in protected public lands in Montana history," Todd says.

Senator Daines says its time to remove the protection status for the land because the federal government has taken more than 30 years to determine what to do with the wilderness areas. Daines says the future of the land has been in limbo for too long and it’s time for Congress to act.

But members of Our Land, Our Legacy say that’s the wrong approach.

“I like Steve Daines and I voted for him. But this WSA bill was a complete surprise and a real disappointment,” Byerly says.

Lewistown sits at the foot of the Big Snowy Mountains, one of the Wilderness Study Areas targeted by Daines bill.  The measure could also impact other WSA’s including Blue Joint and Sapphire south and east of Hamilton, the Middle Fork Judith south of Stanford and the West Pioneer east of Wisdom.

“I’m pretty plugged into the community, and there has been no public issue with the Snowies being managed as a Wilderness. No public concerns have been expressed.”

Byerly says Daines hasn’t held any public meetings in the state to explain his legislation and to accept comment from his constituents.

The bill has received support from some county commissioners, hunting groups, and trail bike enthusiasts.

Daines is scheduled to promote his bill during its first hearing in the Senate Energy and Natural Resources Committee on Wednesday. 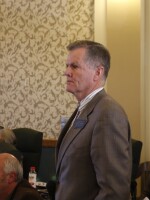